Ballard and the 8-year-old Belgian Warmblood mare, owned by Ilan Ferder and Esperanza Imports LLC, were one of 11 entries to navigate the first-round, Guilherme Jorge-designed course without fault, making for a crowd-pleasing jump-off round.

When Ballard crossed under the Longines archway and entered the ring as the penultimate jump-off entry, the time to beat had been set at 29.13 seconds by the USA’s Karl Cook and E’Special P.S., owned by Signe Ostby. 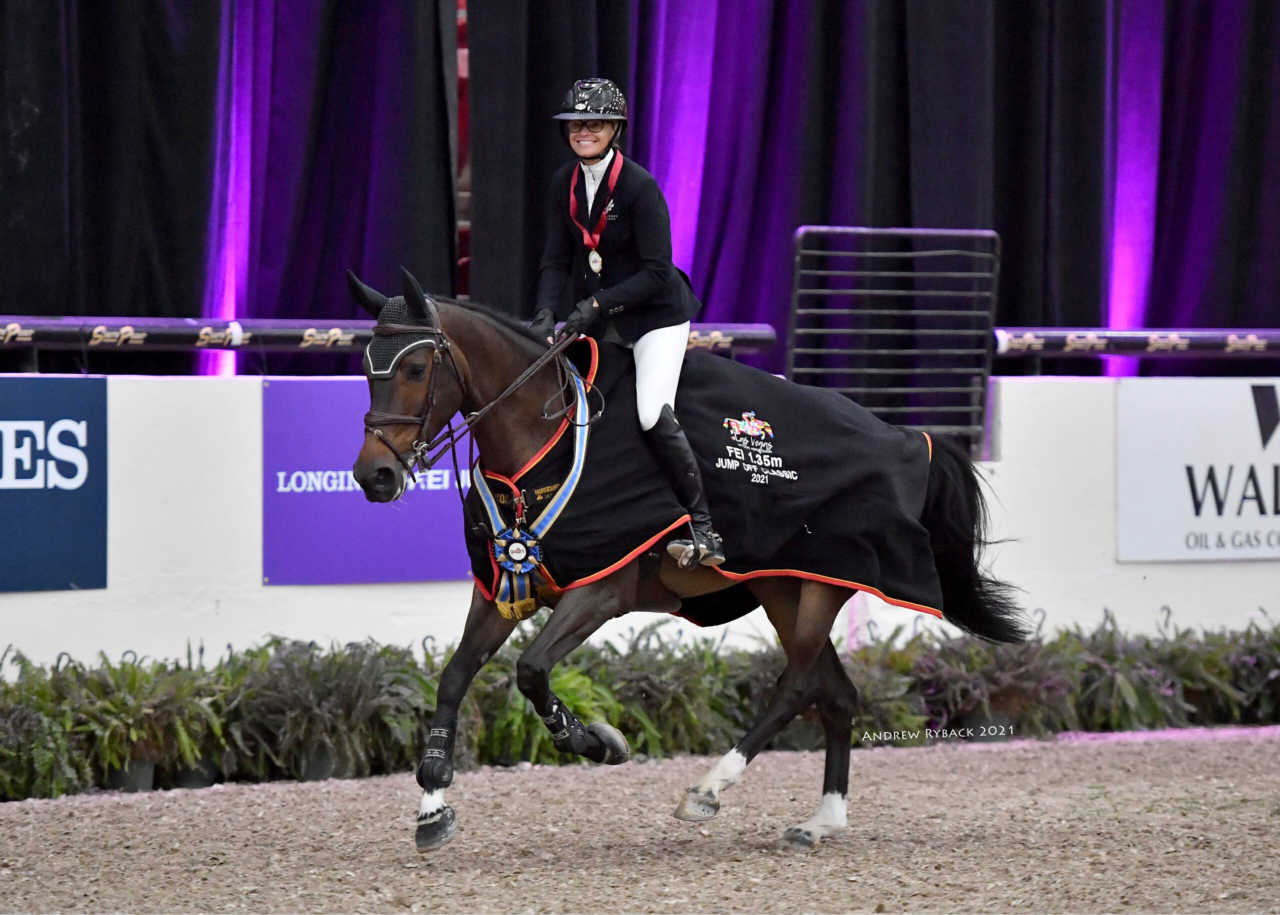 While Ballard felt that she and Nanini van d’Abelendreef could have shaved off further time had they opted to leave out a stride or two that others had, their time of 28.89 seconds would prove to be just enough to clinch the win. With Cook finishing in second place, third place went to Laura Hite of the U.S., and Chattanooga, owned by HF Farms LLC.

“It worked out for me tonight,” said Ballard, who will also contest Saturday’s $50,000 CSI4*-W Las Vegas National Winning Round Classic with Nanini van d’Abelendreef. “I left the window open for somebody else to beat me, but on the flip side, Nini’s getting ready to jump her biggest class tomorrow, so the more confident we can go into the night class the better.”

Ballard has had the ride on “Nini” for the past year, and for her, the Las Vegas National CSI4*-W presents an ideal opportunity for the young mare. 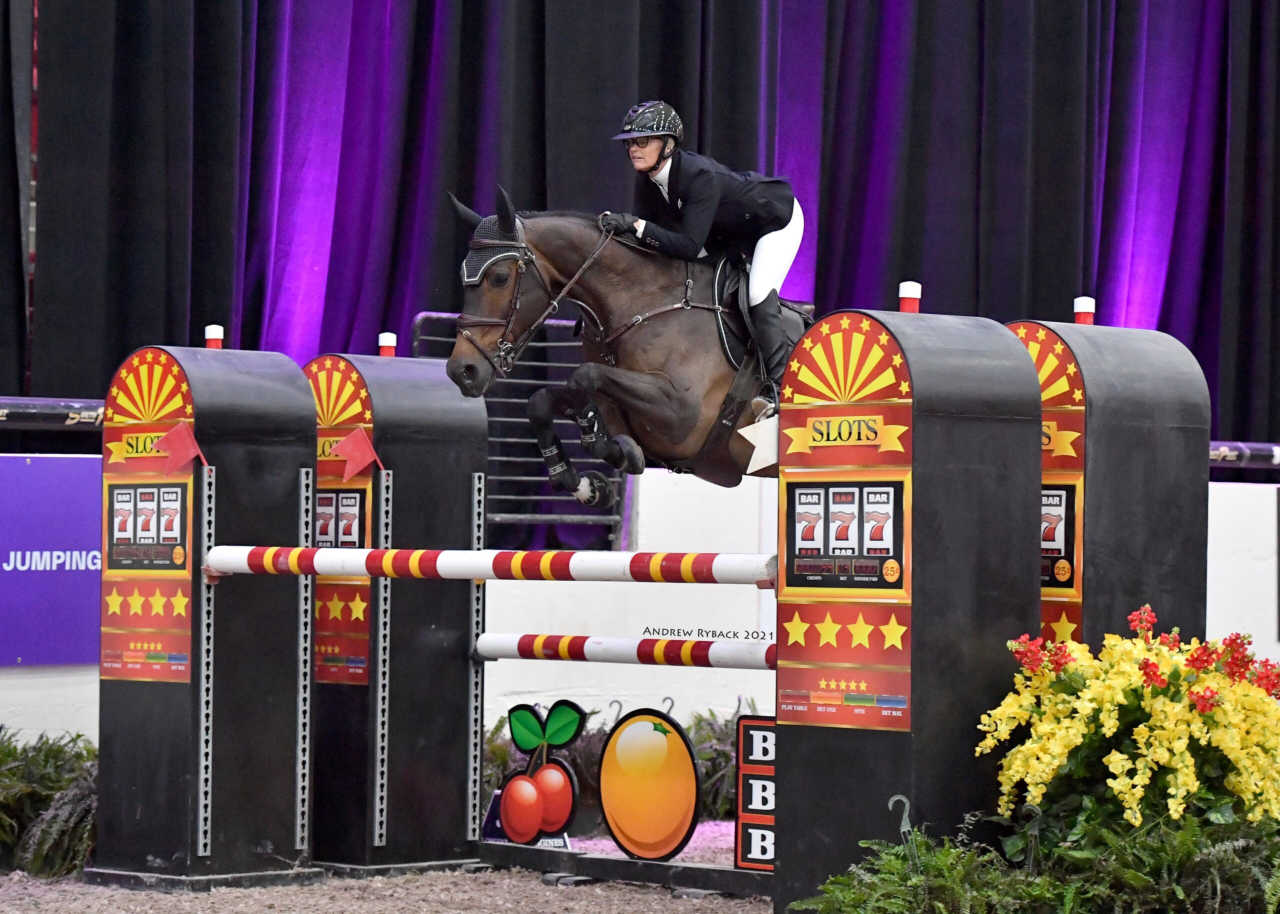 “This is the first opportunity that we’ve had to bring her to a [Fédération Equestre Internationale] show, so it’s a pretty big deal – her first time out FEI and her first big win,” said Ballard, who expressed great appreciation for the offering of a 1.35m CSI4*-W division at this year’s Las Vegas National Horse Show. “You saw a mixed group of horses and riders in the class, some young riders that were able to come to the Las Vegas Horse Show to show FEI, and I was able to bring a young horse, which I normally would never be able to do in a CSI4*. I think it’s quite an opportunity, and it was well supported, so maybe it’s something that we should work for at more shows in the future.”

Along with a Horseware Ireland blanket and an Ogilvy saddle pad, provided by Tack of the Town, Ballard was awarded a Human Touch Foot and Calf Massager for her win. 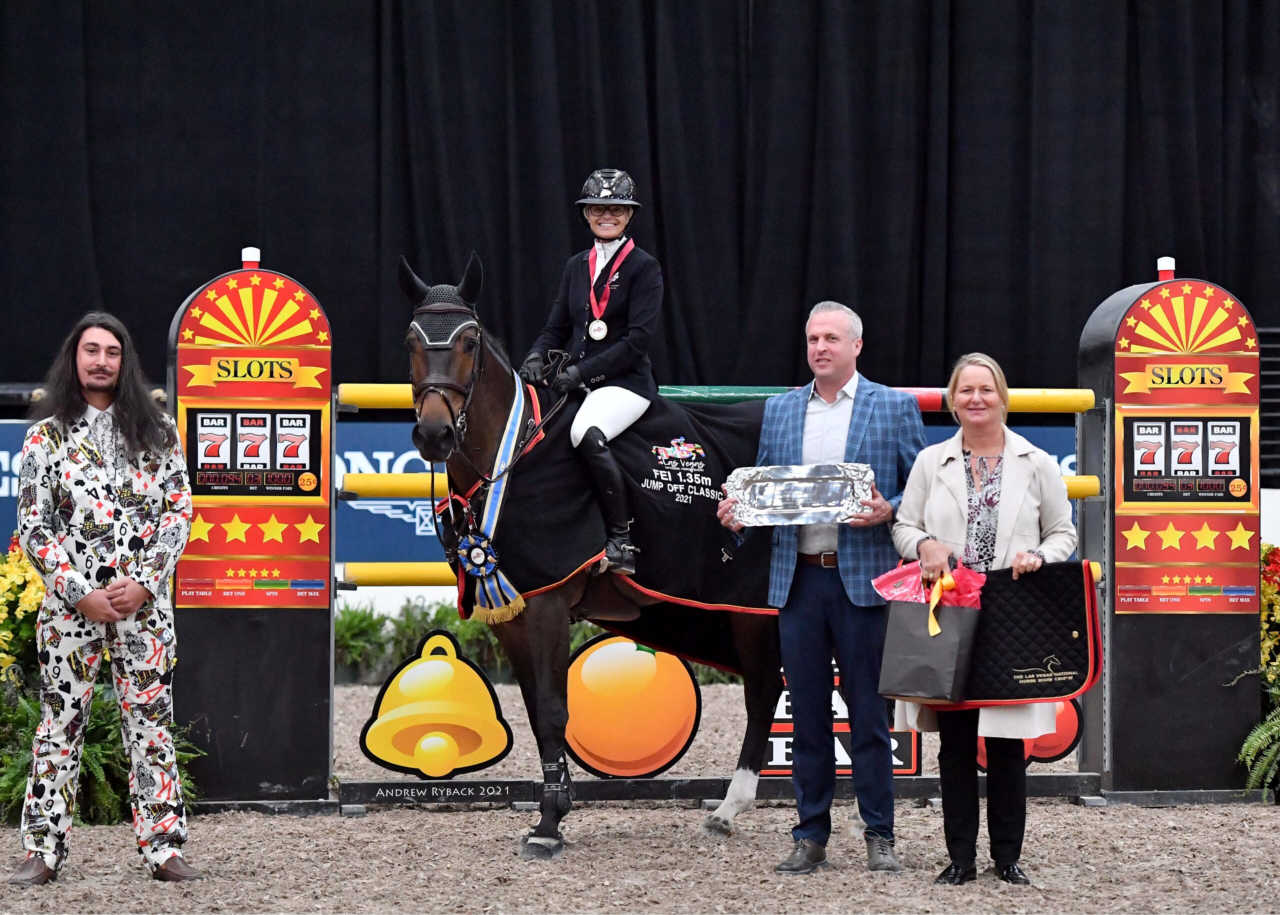 For her win, Erynn Ballard was presented with numerous awards, including a certificate for a Human Touch Foot and Calf Masssager.
Photo by Andrew Ryback Photography

“I think that Vegas is really special,” concluded Ballard. “I’ve jumped three World Cup qualifiers so far – Sacramento, Kentucky, and now Vegas. The feel in Sacramento and now Vegas prepares you for World Cup Finals. There’s such a great atmosphere. They’re not huge rings, so I think you really get an opportunity to know if you’re ready to go to the World Cup Finals or if you have some work to do.”

Competition at the Las Vegas National CSI4*-W continues through Sunday, November 21. The highlight event of the week, the $150,000 Longines FEI Jumping World CupTM Las Vegas, presented by Walter Oil & Gas Corporation, gets underway at 8 p.m. on Saturday, November 20, with doors opening at 6 p.m. Purchase tickets to watch which rider has #TheTimeToBeat here!

For a full schedule and event details, visit www.TheLasVegasNational.com. To access the live stream during competition hours, click here, and exhibitors can view and access round videos here.

In Front of the Lens

All photos by Alden Corrigan 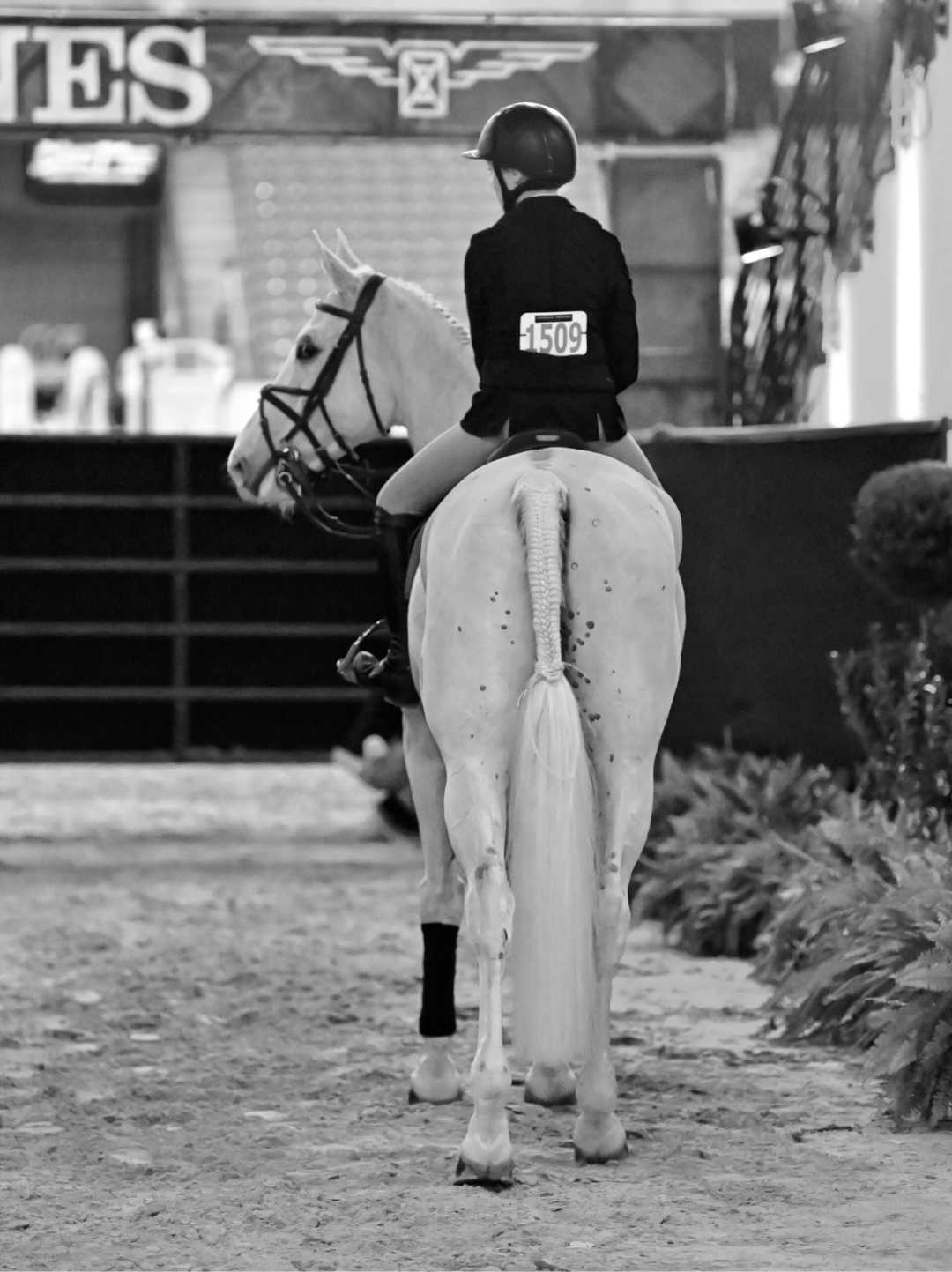 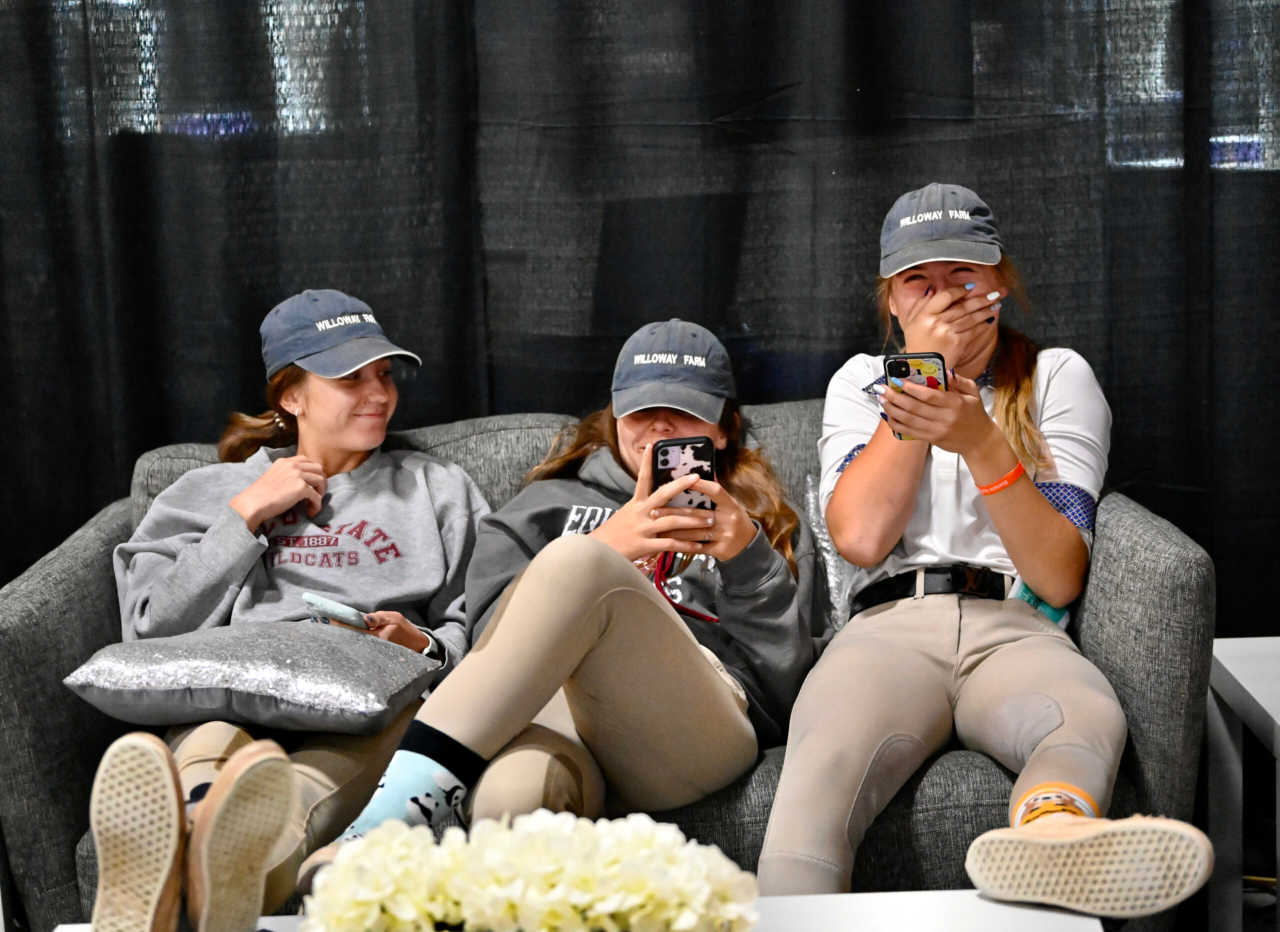 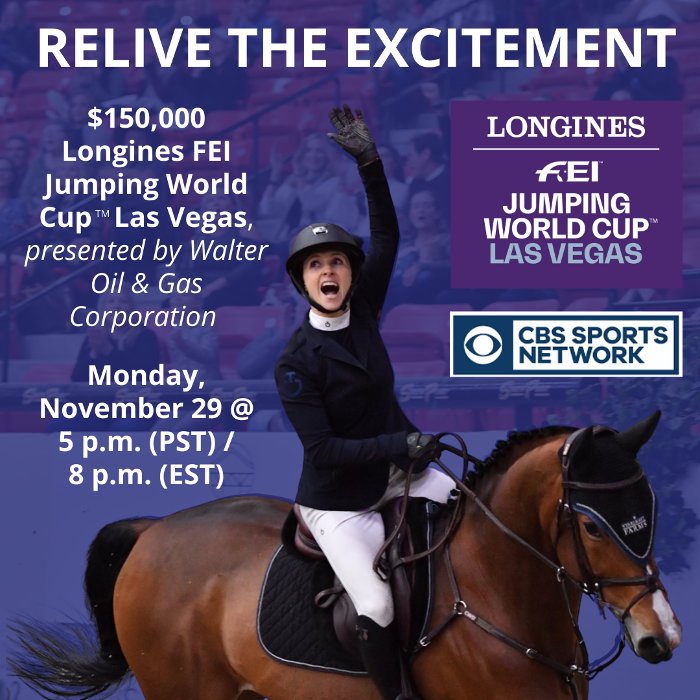 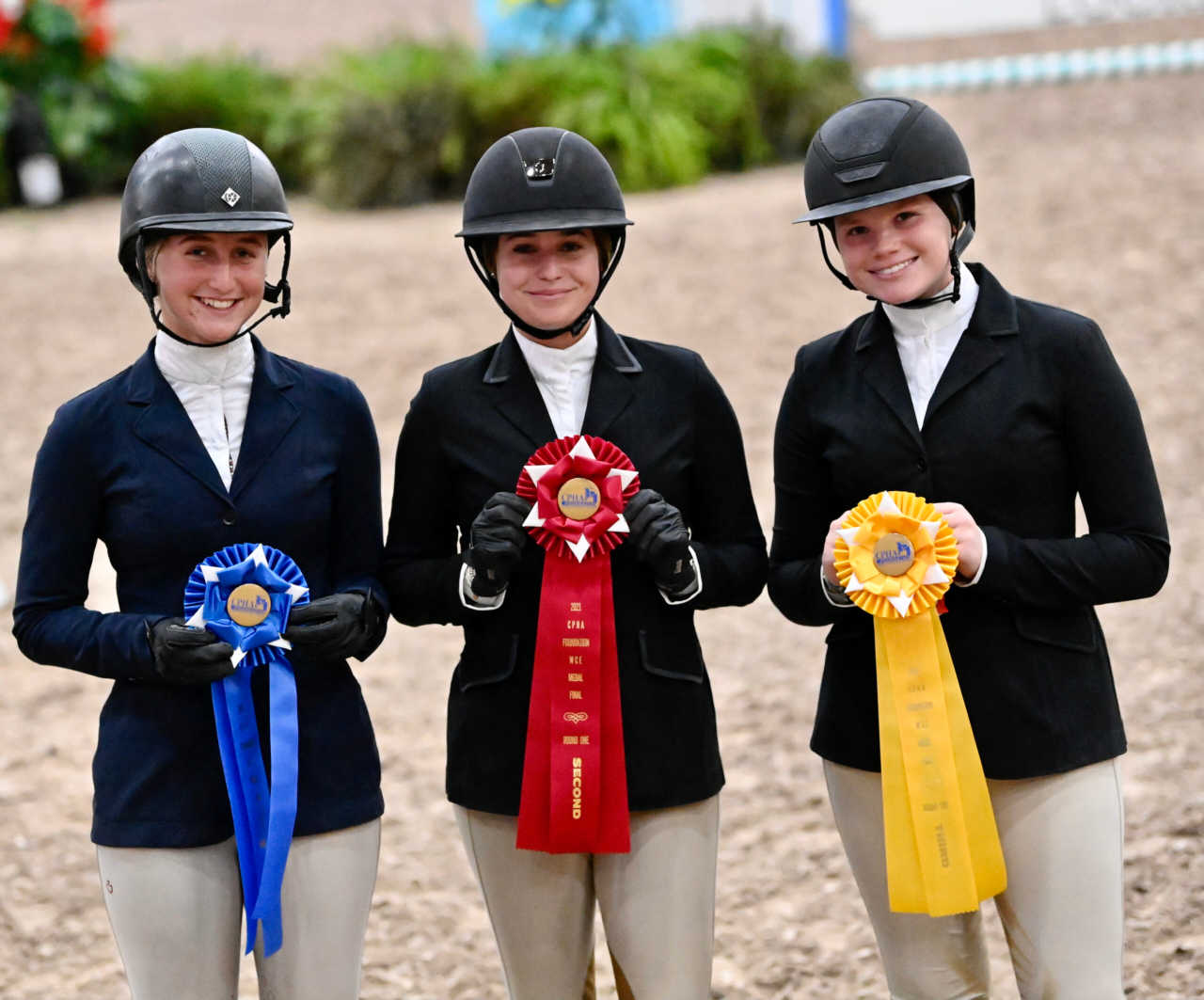 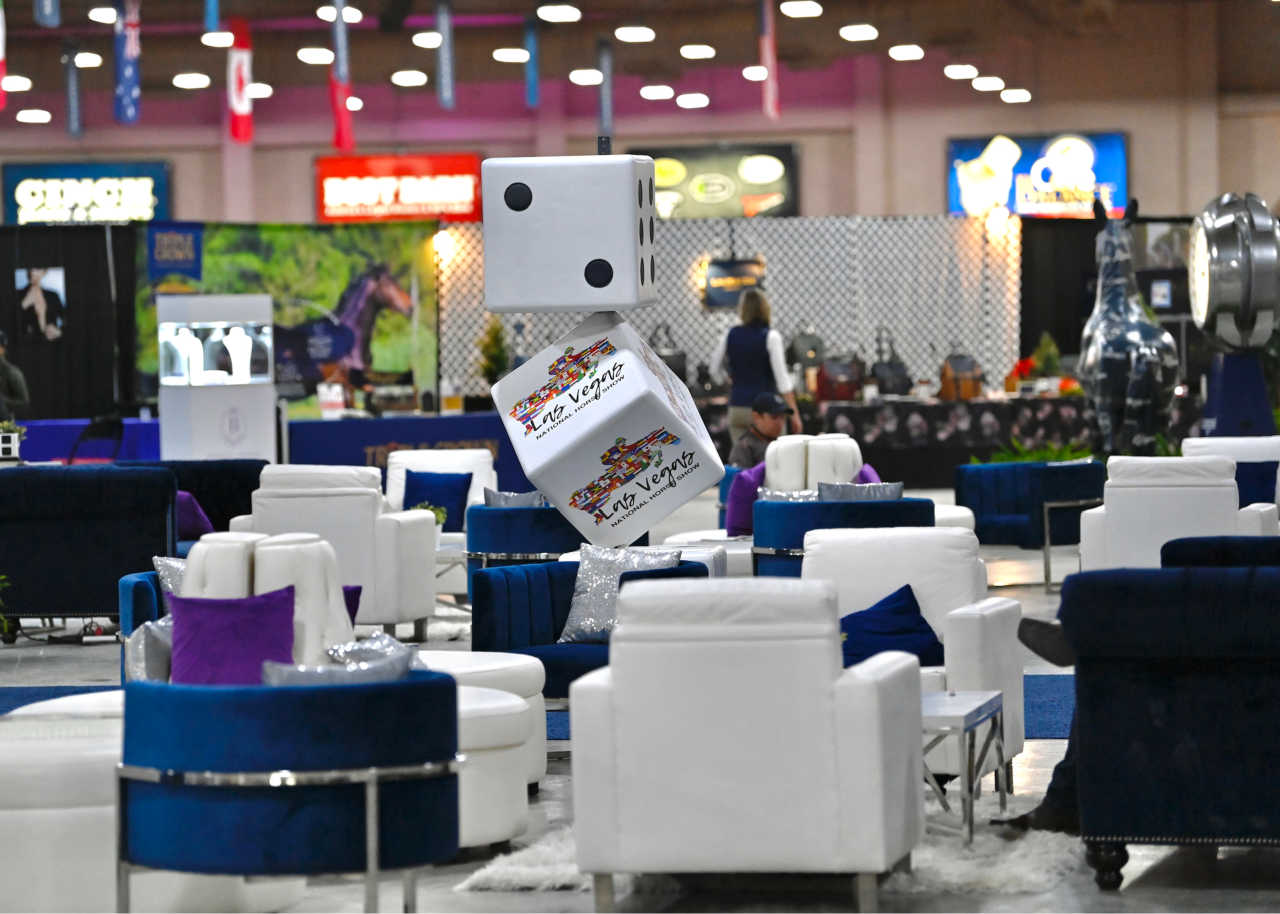 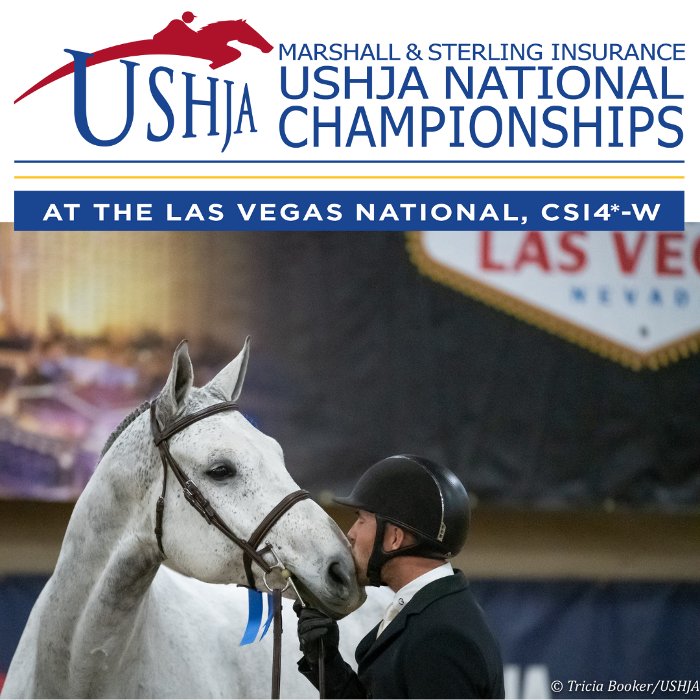 Keep Up With Coverage: the Marshall & Sterling/USHJA National Championships

For the latest news, photos, and results from the Marshall & Sterling/USHJA National Championships at the Las Vegas National CSI4*-W, visit the links below.

The Las Vegas National Horse Show CSI4*-W is an internationally recognized, premier year-end event that attracts top horses and riders from across the U.S. and beyond.

Among the highlight events of this year’s show is the $150,000 Longines FEI Jumping World CupTM Las Vegas, presented by Walter Oil & Gas Corporation, one of only eight World Cup Final qualifying classes held in North America. The Las Vegas National Horse Show is also home to the Marshall & Sterling Insurance/U.S. Hunter Jumper Association National Championships which gives the best, qualified riders the opportunity to compete against their peers for national titles at all levels of the sport.

Tickets for the $150,000 Longines FEI Jumping World CupTM Las Vegas are available for purchase here, and admission is free throughout the rest of the week. To learn more about the Las Vegas National Horse Show, visit www.TheLasVegasNational.com 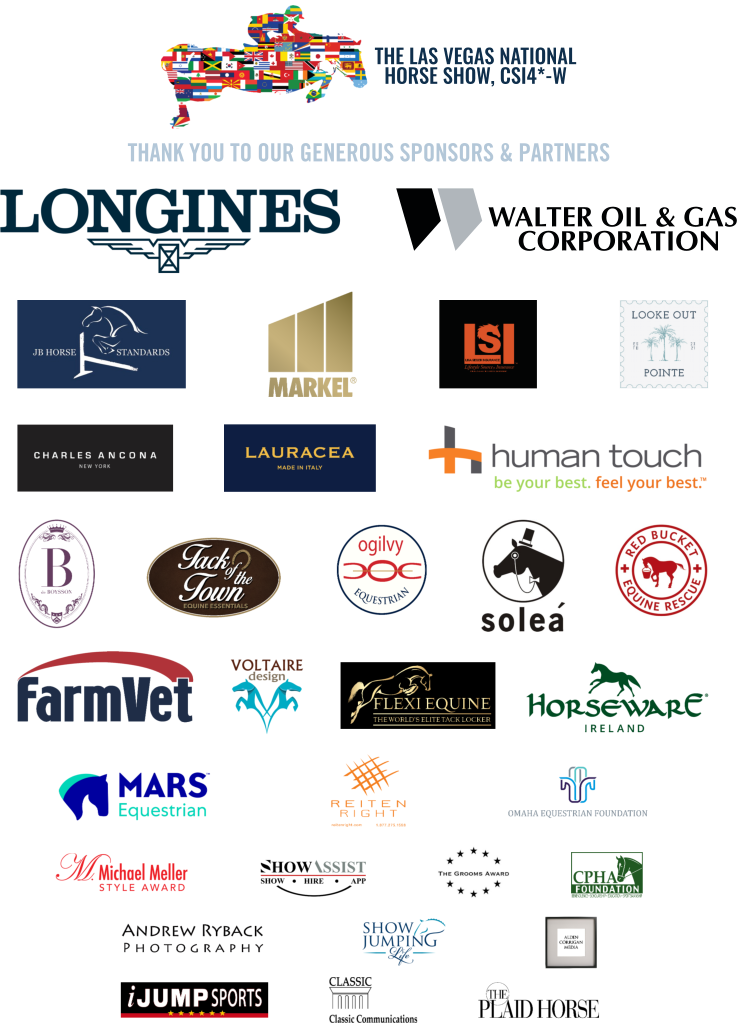